Moments is Hotel Neon’s sixth full-length album. Recorded in the span of just eight weeks and done remotely, Moments is definitely one of the more minimal and textural albums Hotel Neon have ever made. It does not disappoint!

One of my favourite ambient artist out there. Andrew Heath’s latest is a must for ambient lovers. In this release he explores the use of field recordings as texture and also the piano as a main guiding instrument. The cover is a photograph of Salisbury Plain, an area of the UK that Andrew grew up in. It was taken as part of an arts project that retraced a journey by the author Laurie Lee, undertaken in 1934.

Released in celebration of its 10-year anniversary, Hammock’s haunting, critically acclaimed EP Longest Year is back. For this re-release, all songs feature new mixes and masters, and now includes the never-before-heard bonus track, “EveryWhen.”

“Reigning as one of the most well-known experimental instrumental groups out there with a respected musical legacy spanning nearly 20 years, Irish four-piece GOD IS AN ASTRONAUT will reach a career benchmark upon the release of their 10th studio album, Ghost Tapes #10.” 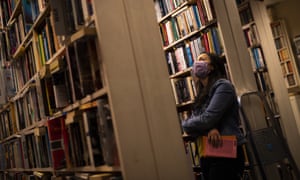 “Whether you’re a child discovering new worlds of adventure or Faye Dunaway losing herself in the philosophy section, they are a sanctuary for all.”

Read the article: Bookshops are a precious shelter from the storms of life

“Vespertine is the musical score that This Will Destroy You composed for Chef Jordan Kahn’s 2-Michelin Star restaurant of the same name. The score originally ran exclusively at the physical site of the restaurant in Culver City, California since its grand opening in late 2017. The program consists of seven pieces specifically written for moments within the building itself (and even the space around and on top of it).

The sequencing of the album is an attempt to mimic the order in which diners at Vespertine encounter different spaces throughout their experience. “Rumble” is the ever-present hum and ominous force surrounding the immediate exterior of the building. “Entrance” signifies the crossing over from the terrestrial realm into the inner atmosphere of “The Waffle” structure, where the evening begins to unfold. “Kitchen” is an warm, hospitable piece that accompanies a personal encounter with Chef Kahn. “Rooftop” and its celestially-inspired movements often pair perfectly with clear nights atop The Waffle. “Dining Room” sets the tone for a multi-course main dinner service. “Exit” is another transitional piece signifying the end of the main service and setting the stage for a supplemental experience. Finally, “Garden” welcomes diners back into a semi-terrestrial realm wherein after-dinner sweets and beverages accompany reflection upon the evening’s moments, all in full view of the looming architectural monolith that is The Waffle.”

Born in the mountains of West Virginia; completed during quarantine in Philadelphia, Baltimore, and Dayton.

—
“Why some blocks of stone, hacked into violent and tortured shapes, should so profoundly tranquillise the mind I do not know. Perhaps the eye imposes its own rhythm on what is only a confusion: one has to look creatively to see this mass of rock as more than jag and pinnacle – as beauty…“